The Connect Hyde Park VT Project is a grant-funded collaboration between the Town and Village of Hyde Park that seeks to create an Action Plan that will provide the community with a “road map” to improving economic vitality through investments in infrastructure, marketing strategies and leveraging the significant recreational assets nearby (such as the Lamoille Valley Rail Trail). 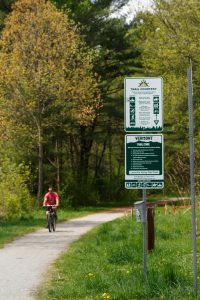 Why focus on an asset like the LVRT?  Because active transportation (such as walking or biking) is reshaping our communities. According to the Urban Land Institute, 50% of people in the US identify walkability as a top priority or a high priority when considering where to live. And, bicycling has become one of the country’s fastest growing forms of transportation.  It has been demonstrated that people who arrive at busineses by foot or by bike spend less, but visit more often, resulting in more local spending per month (ULI, Active Transportation and Real Estate: The Next Frontier, 2017).

Hyde Park is a perfect central location from which people can access a number of recreational resources including the LVRT, the Green River Reservoir, Cricket Hill Trail Network, Lamoille River and Catamount Trail (among others). Further, Hyde Park is at the center of a geographical “triangle” between the ski resorts of Stowe, Smuggler’s Notch and Jay Peak. These resources are popular for locals and visitors alike, which makes Hyde Park’s central location a valuable asset from an economic and recreational standpoint.

While taking advantage of recreational assets is a key component of this project, the Action Plan will also seek to make the Village of Hyde Park a valuable place for those people who live, work and play in Hyde Park.

The Connect Hyde Park VT project is funded through a Better Connections Grant and is overseen by a Town appointed Working Group that includes members of the community, the Regional Planning Commission (NVDA) and the two state agencies that manage the Better Connections Program (VTrans and ACCD).